Building the Smart Home of the Future

I met the concept of smart home 15 years ago, thanks to my colleagues on a business trip in the Netherlands. The psychopathic home owner, who was broadcasting on the internet at bwired.nl, was posting all kinds of information on his website, from doorbell logs to toilet flushing statistics, thanks to the various devices he placed in the house.

I was very impressed by this, but at that time I did not have the automation knowledge to set up this mechanism. 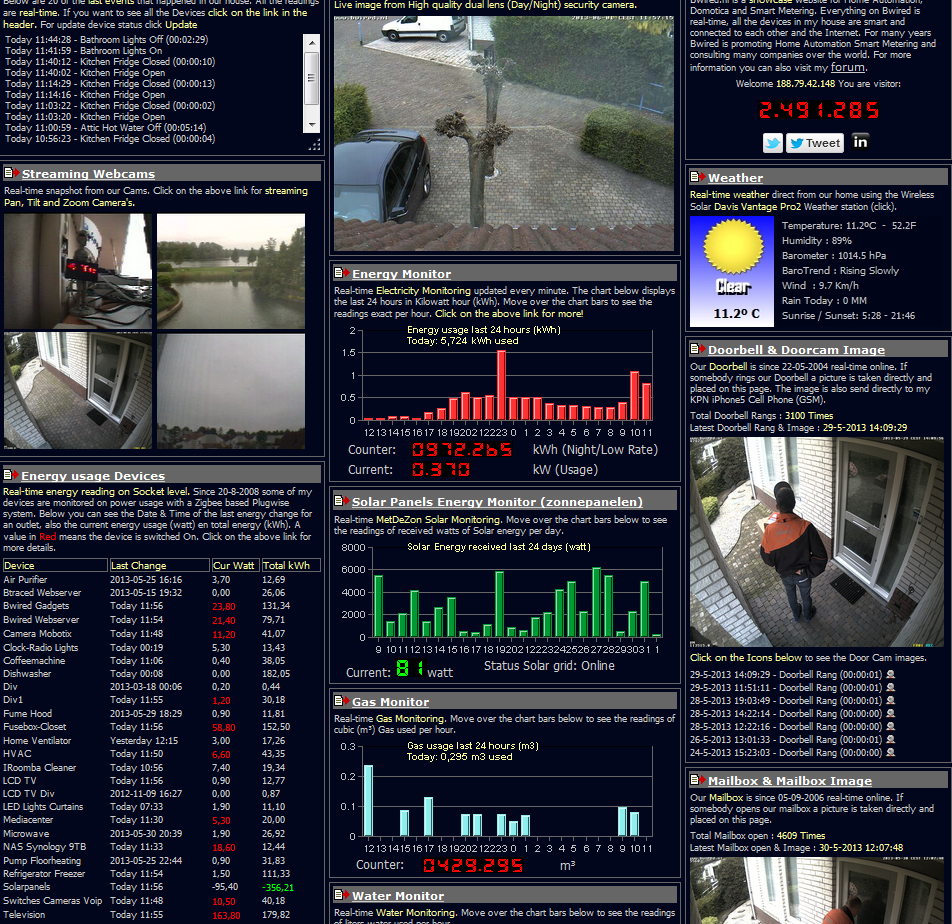 Setting up my new Smart Home

While our apartment, which went into urban transformation in 2020, was being rebuilt, I decided to design my new house as a smart home with all the details like a pro.

I guess you've heard of various smart home compatible products or tried to use them in your dumb home. They are now extremely easy to install and use, but designing the structure as a whole in the form of a smart building is a costly and difficult task.

In order for all my devices to be compatible with each other and to work in harmony, I used the products of the Turkish Interra company in this regard. Interra is both the leader of the Turkish market and exports its own automation devices to more than 80 countries. 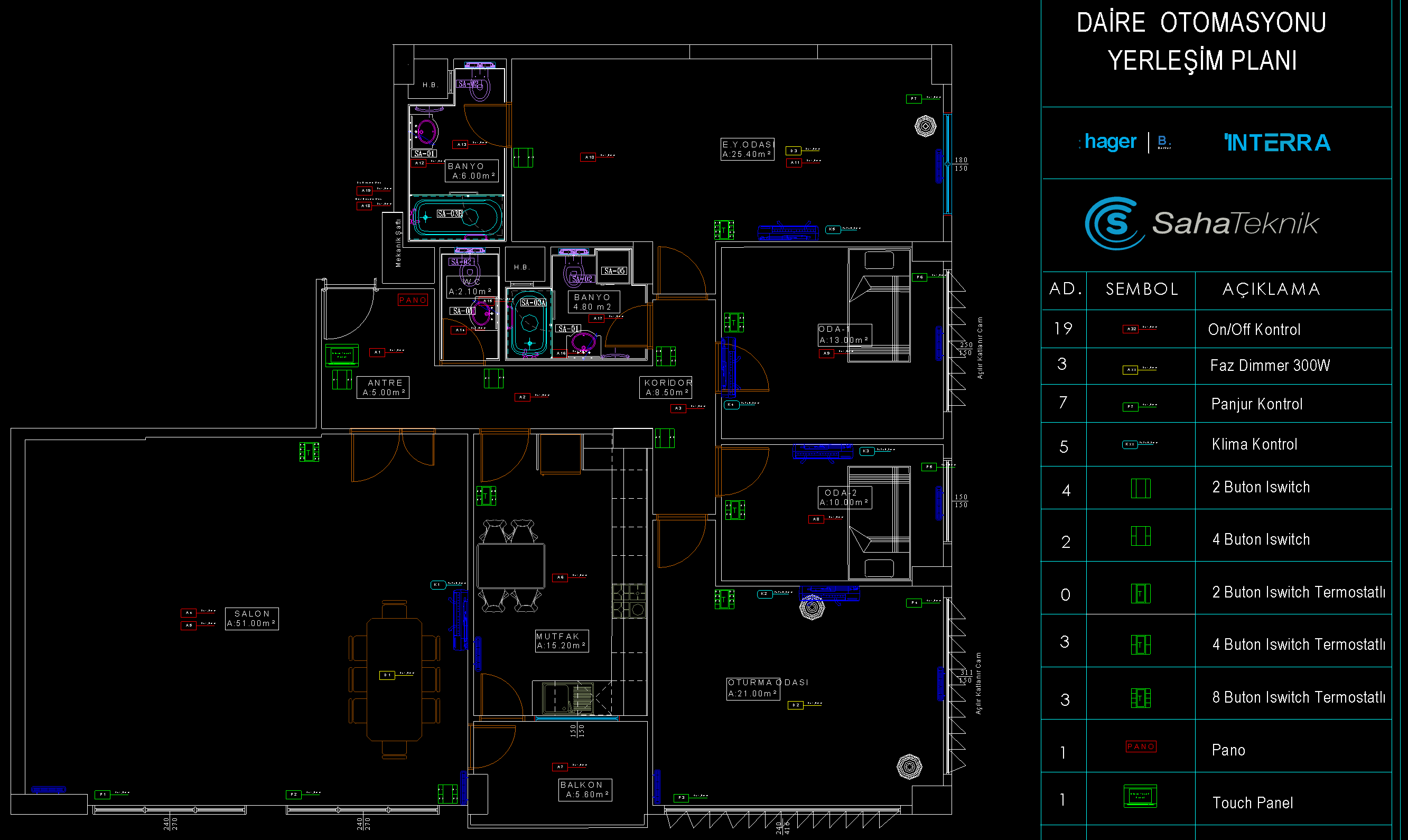 Normally, they don't do this much for a single apartment, but since I was the Software R&D Manager at Interra at that time, I knew many products in depth and I also worked on the project myself to bring my smart home to life.

For this, numerous changes were needed in the electrical plan, fuse panel, wiring, alarm system.

For example, in a standard dumb house, you control the light by turning the electricity to the light on and off with the key. In a smart home with smart lighting, your smart switch sends a digital command to your relay that controls the light (which we call Combo). Thus, thanks to your data line that reaches all parts of the house, you can automate the event or scenario you want.

I chose to use the wired KNX standard in my smart home, KNX is a standard that has been widely used in the automation industry for many years and will not become obsolete in the future.

The reason why I use wired connection is to make sure that the telegram I transmit reaches everywhere, to make sure that I will not have transmission problems when I put furniture in front of the receiver or transmitter.

I mean, your devices communicate over a 30-volt cable on an electronic layer similar to a serial port. KNX automation systems are decentralized. So if any of your smart devices in your smart home break down, your other devices will continue to run smoothly.

Planning Right from the Beginning

As I said, the electricity plan of a smart house is very different from stupid houses, so it is a great benefit to undertake this work during the construction phase. From your fuse panel to every electrical switch and device of the house, there needs to be a data cable and an electrical cable to the lighting. And that means pulling a lot of cables. For this reason, it needs to be well planned.

The electric switch in a smart home can take on other tasks besides turning on the light. For example, I check the blinds from the same switch. or by long pressing a button, all the lights in the house can be turned off. All this is set up through the ETS software published by the KNX foundation. Under normal conditions, this work is done by the automation company.

Apart from that, you can also control the HVAC in your smart home. All you have to do is connect the corresponding KNX compatible devices. For example, if we connect this smart pipe or whatever it is called to the entrance of the heater, we can turn off our heating from our mobile phone when we are not at home.Our flood detectors can send us e-mails when the house is flooded. I plugged this into the bathroom and kitchen. I can close the valve on my mobile phone if the house is flooded.In addition to all these advanced devices, it is possible to integrate your stupid devices into your smart home. For this, we can use devices that translate different communication protocols called gateways into smart home communication. We can also place a small KNX apparatus inside our Stupid switches (called PushButton Interface) and have it send a KNX command in case the switch position changes and integrate it into our smart home.

We have a panel where we can control all these systems. It looks very cool at the entrance. Thanks to this tool, you can create scenarios that run on various dates in addition to controlling the devices from only one center. It's a great device. because I've personally worked on the linux layer of this and on background services.

If you plan your smart home well, you won't want to easily go back to the stupid house again. Although the 50.000 expense you will make is initially, it will make you feel better to know that you can sell the house for more than 500.000 diffrence.

Hello world
This is my first post to fill up some space...